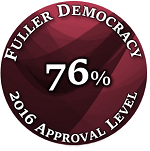 In Fuller Democracy 2016, 76% of participants from Fingal said that they supported a basic social income, in other words replacing the social protection budget with a flat annual payment to all citizens (more details below).

Basic social income is a big change, but there are important reasons for why it is necessary.

The rate of technological progress means that our society is going through a profound change. We are able to produce more with less effort than ever before. Most politicians seem to view this as a negative thing. They seem very upset that there is less work to be done and spend most of their time trying to get people a job.

But technically, no one wants ‘a job’ per se – what they want are the things you get from a job: money (first and foremost) and perhaps social status, and a chance to work on something fulfilling with similarly-minded colleagues. So, instead of doing what most politicians do and offering people something that technically qualifies as ‘a job’, but often doesn’t even give you the things you want from a job, I feel that we need to turn our thinking about the economy and jobs around completely.

Automation means that fewer people are needed to produce the same things. It also means that work will likely become more creative, research-focused and experimental in nature. And, at least in the near future, automation will increase. We will probably have self-driving cars, repetitive white-collar work currently performed by junior lawyers and accountants will likely be done by computer, and robots may one day clean our homes and care for the elderly. After all, they’re already milking our cows.

It’s important to remember that this is a good thing and that we have been here before. Not that long ago, people used to work more to produce a lower standard of living because they had to perform more tasks manually. Want to do some laundry? Better get out the washboard. Want to go into town? Well, hitch up the horses then. Or walk. Then afterwards you can sew your own clothes and maybe dip a few candles.

Very few people live and work like this today, although it was a common lifestyle not long ago. But when our circumstances changed with electricity, home appliances and swift transportation, we adapted our work arrangements to those new circumstances. Education was ramped up, as well as the ability to work outside the home and perform more tasks geared to improvement rather than just survival.

In an era where communication is instantaneous, manufacturing is increasingly performed by robots, and we are on the verge of having our shopping items delivered by drone, we need to think about the work arrangements that are appropriate to these new conditions.

The most promising avenue here is a basic social income, which 76% of participants from Fingal said that they would support in Fuller Democracy 2016.

Basic social income (or universal basic income) is a payment made to every citizen (or resident) in a country, which replaces the payments normally made from the social welfare budget. It is not means-tested, so it does away with a lot of the administration associated with the social welfare budget, but it may be allotted in such a way that people of above average means do not materially benefit from it (e.g. by also cancelling tax credits).

The benefits of basic social income are considered to be:

UPDATE: In Fuller Democracy 2017, we did a deep dive into basic social income to see how it could be financed. This proved to be a difficult question on what is obviously a longer-term project, but a few clear points did emerge that we can orient on in future.

The third point on which there was substantial agreement was that basic social income should be financed by nationalizing natural resources (like oil and gas). There was no majority on any other method of finance for basic social income.