I strongly support a multi-cultural, multi-faith Ireland, where people from all parts of the world can lead fulfilling lives in an atmosphere of mutual respect and tolerance. To this end, I support integration facilities and programmes which seek to bring together people from diverse cultural backgrounds. This is something I have been particularly involved in, and you can see some of the activities on my page here.

I also condemn discrimination and harassment of any kind and am committed to helping my constituents on these points. Fingal is one of the most culturally and ethnically diverse parts of Ireland – and that is what makes it such a great place to live!

In Fuller Democracy 2016, I asked two questions related to the political asylum process in Ireland. I would like to point out, that while people who are seeking asylum are, obviously, immigrants most immigrants to Ireland never end up anywhere near the asylum system. This is a good thing, because asylum centres are not generally very pleasant places to be. When I lived in Germany, I volunteered with Amnesty International to aid people in their asylum processes and worked for one of Germany’s top immigration and asylum lawyers as part of my studies. As a result, I’ve had quite a lot of contact with the European political asylum system over the years and with many people from around the world (but mainly from the Middle East) who were seeking asylum.

I was interested to see what people would say about my two queries, since the going opinion tends to be that anything touching on immigration brings out the worst in people. However, Fuller Democracy revealed this ‘common knowledge’ to be just one more strawman argument against digital democracy, as most people showed quite a lot of compassion for the plight of asylum-seekers. 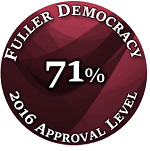 My first question was whether Ireland should end the practice of direct provision in Ireland. Direct provision means that people who are seeking asylum are not allowed to work while they are awaiting their case decision. They are obliged to live at certain locations and receive a very small amount of money to buy miscellaneous items. However, all their meals, for example, are cooked for them. What can sound good for a fleeting moment is actually quite hellish, because it means that people have no control of even the basics of their own lives, and are left with nothing to do all day but agonize over the asylum decision that will, of course, literally decide their fate. Many people become seriously depressed under these conditions. To add insult to injury, direct provision services are farmed out to private companies that make profits, while the idea that asylum seekers ‘not working’ tends to fuel anti-immigrant sentiment.

71% of people who participated in Fuller Democracy voted in favour of ending direct provision. This would provide people seeking asylum with some control over their own lives, meaning they would likely leave the asylum system in somewhat better mental shape, and be enabled to contribute to the economy in at least some manner while awaiting their decision. 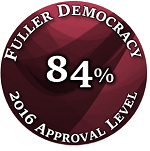 I also asked people whether they were in favour of shortening the asylum process, which can take up to eight years to complete. 84% of people who took part agreed to this measure, which is estimated to save Ireland more than ten million Euros each year.

So, the first good news is that people are not nearly so racist and anti-immigrant as the media would have one believe. It also highlights that there are a lot of points of convergence in the interests of different sectors of society: it is in the interests of asylum seekers to have a shorter process and to be able to have some autonomy during that process, and it is in everyone else’s interests that we not pay taxes to keep people trapped in a system of direct provision for years and years, while companies profit from it.

In short: we can save money by doing the nice thing here: it doesn’t get any better than that.

The main political parties often speak of ‘difficult decisions’, but the truth is, these policies are often no-brainers with almost everything speaking for them and very little against.

The second piece of good news is that the Supreme Court recently decided (May 2017) that the absolute ban on asylum seekers working while there is no limit on the time it may take to complete an asylum process is unconstitutional. The legislature has been given six months to take appropriate measures. These will either have to be measures that shorten the asylum process by imposing maximum time limits or loosening the rules around direct provision. I am glad to see this happening, but, as usual, the people who participated in Fuller Democracy were ahead of the game, and if everyone were using digital democracy, we would be moving forward faster and better.