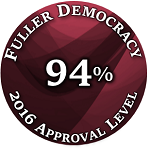 At the moment, there are only two basic income tax bands in Ireland: 20% and 40%, and the jump to 40% happens quite early on, around about the point where you earn 35k-40k a year, depending on your circumstances. Unfortunately, if you live in Fingal, 35k no longer counts as a lot of money. Indeed, such an annual wage could perhaps better be termed ‘barely adequate’.

Perhaps unsurprisingly, in Fuller Democracy 2016, 94% of participants in Fingal voted in favour of a more gradual increase in income tax. For this to remain budget neutral, the top rate of income tax would need to be slightly higher, but a taxpayer would also need to make significantly more money to be affected by it. Any person earning less than ca. 140k a year would see their taxes decrease or stay the same. As a rough starting point, I would suggest six different tax brackets (based on a single person’s income; the tax advantages for married couples/single parent families would remain):

It is important to remember that anyone earning over 100k has now paid less tax on everything up until that point, so they would have to earn approximately 140k for their total tax bill to increase at a 45% top tax rate.

It should be noted that these are very rough figures, and that they only serve as a starting point for income tax reform. The only truly important points are that the tax burden needs to go slightly down for people on the full range of middle incomes and slightly up for people on truly high incomes; and that these increases need to come about more gradually. The exact numbers could (and should) be optimized over time, based on the national income profile and tax take.

Beyond the fact that a more gradual increase in taxes would be a boon to struggling families, such a policy would help to get money circulating in the economy again. People on middle incomes are more likely than very wealthy people to spend their saved tax Euros and to spend them in Ireland. Additionally, many people are on precarious incomes and earn large portions of their income through unpredictable bonuses and other incentives. More gradual tax rates can give people a bit of a boost through times when their income dips.

I have raised this point with several TDs, as well as with Minister Donohoe (Minister for Finance and Public Expenditure and Reform) and he promised to take it into consideration in the next budget. However, I do feel that it is ultimately up to me to spearhead this initiative.

It is very important that all reforms are the product of joined up thinking, and it is worth noting that this one comes with some related policies and considerations that would be necessary for it to reach its full potential: