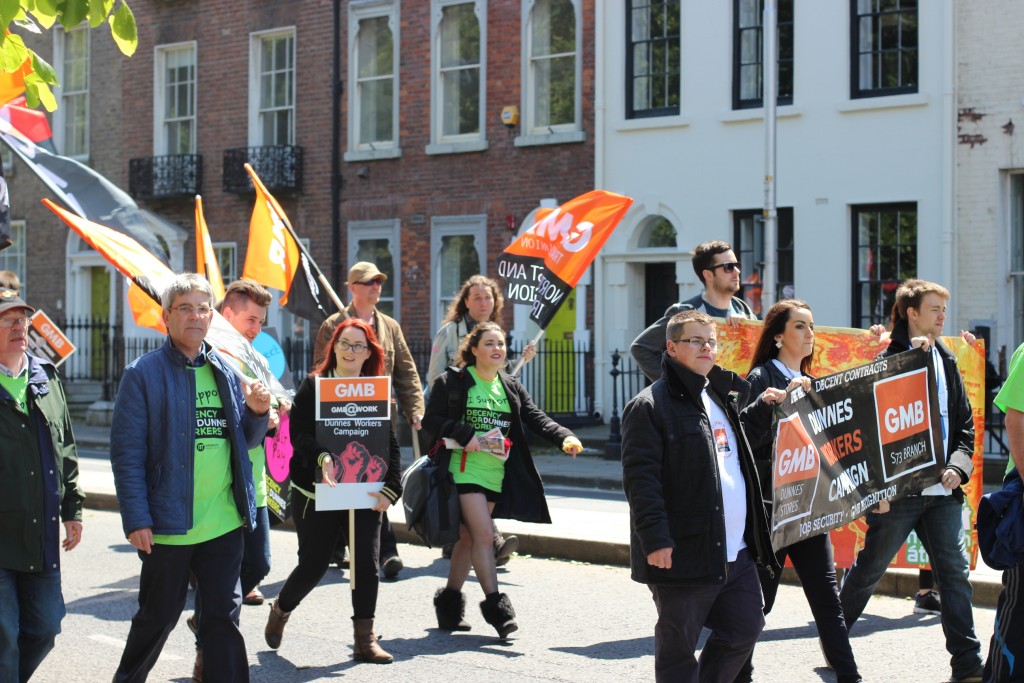 I was happy to be able to take part in the Dunnes Store protest in Dublin on June 6th, because it highlights one of the biggest employment issues today: job precarity.

Job precarity exists when you are working – you just don’t know for how long and under what conditions. When your job is precarious, you live life in limbo.

Dunnes workers are protesting because longer-term employees have seen their hours cut to allow the company to hire new workers on lower wages, and because employee hours are fluctuating with short-term notice (so-called flexi-hour contracts), meaning that they cannot predict their own earnings. This can make it almost impossible to get a loan for a mortgage or car, and to engage in any other long-term financial planning. And there’s absolutely no need to inflict this kind of pain and suffering: Dunnes is hardly in financial difficulty – the company is estimated to have an annual profit of 350 million Euro.

Dunnes workers are absolutely right when they say that such practices show a deep disregard for workers as human beings, treating them as objects to be used and discarded the moment a ‘better deal’ (i.e. someone who is desperate enough to put up with even more exploitation) comes along. Increasing job precarity isn’t the necessary consequence of a tough market – it’s just a convenient way for extremely profitable businesses to increase their profit margin at the (literal) expense of their own workers.

While the current government is planning to introduce legislation that will help to facilitate resolution of some industrial disputes in future, we need to go much further in battling job precarity and companies’ ability to treat workers as a resource to be sucked dry and then tossed out.

Determining an efficient work roster is the responsibility of management, not employees, and it is something that small businesses manage with very little effort every day. If an employer is somehow unable to manage this simple task, they, and not their employees, should be penalized for it. We could do this by introducing legislation that would require employers to pay a higher hourly wage to employees who are required to work with excessive flexibility, including highly fluctuating work hours or contract-work for labour that is not inherently limited in scope. For example, if an employee’s work hours fluctuated by over 15% from week-to-week, they would need to be paid a higher rate to compensate them for their flexibility. After all, this flexibility is a service that they are providing in the interests of the company: the employer should decide whether they really want to pay for that flexibility or not. The same could be said for an employee undertaking admin or secretarial work on a contract basis.

Making this a part of legislation would mean that it is applicable to all workers, not just unionized ones. It allows companies the freedom to decide whether demanding worker flexibility is really worth the extra pay, while making life much more comfortable for those willing to live with the insecurity of short-term or flexi-hour contracts (typically students or persons who choose to contribute to family income through occasional labour).

Legislation like this would make hiring a more serious decision – but then again, hiring someone should be a serious decision. Employees should only be taken on when they are a valued and necessary part of a business and when all of the risks of expansion have been assessed. This is the responsibility of the employer, as the only person capable of making that assessment and it must remain with them instead of being offloaded onto employees, who have neither the information nor authority to be making those judgements.

Acting responsibly towards your employees is only basic decency and decency really isn’t too much to ask for.