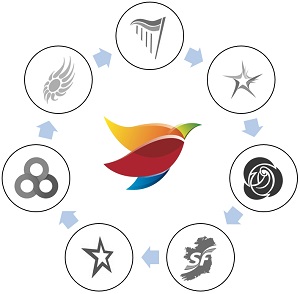 One of the biggest reasons I became dissatisfied with party politics is that parties have a tendency to criticize everything that their opposition does just for the sake of opposition.

As an Independent, I aim to work more constructively in the interests of my constituents.

I’ve therefore decided to analyze the platforms of other parties and candidates and let voters know where I agree and disagree with them and why. Although I will try to be dispassionate, something tells me the temptation to call it as I see it will ultimately prove too much for me. Therefore be warned that this is my own take, and, you, the voter, will need to decide what is in your own best interests. However, it should help to clarify a bit where I stand in relation to other parties.

Since ‘Renua’ just came into being, I thought I would start with them.

Initial Thoughts
I have to admit that I personally can’t quite get past Renua’s beginnings as a party formed by TDs who lost the Fine Gael party whip over abortion legislation. Renua have tried to move away from this (more on that below), but it still dominates my impression of the party, because to me it seems indicative of extremely narrow and repressive conservative views that are grounded in authoritarianism rather than in respect for the individual and liberty. I personally think there should be some restrictions on abortion to ensure that no one takes the decision lightly, but the ‘never under any circumstances’ position is breathtaking in its absolutism. After all, we are talking about a debate that was sparked by the X case (14 year-old pregnant suicidal rape victim) and Savita Halappanavar’s death (woman denied proper medical treatment after suffering a partial miscarriage). Overlooking these facts seems to demand a level of Cromwellian puritanism that mildly freaks me out – and I was raised by bona fide Puritans, so that is no easy feat. While Renua leader Lucinda Creighton has said that her stance on abortion is not religiously motivated, the arguments she brings forward are scarcely more rational. The two main ones are:

When it comes to legislating for abortion in Ireland, whatever practices the residents of India and China engage in are utterly irrelevant, because – oddly – the Oireachtas does not rule over these far away citizens. Irish domestic legislation will have no effect on any of them, provided they never pop over here. And it is unlikely that all 2 billion of them will. It’s even more unlikely that Irish people will begin aborting female children in order to avoid paying for their non-existent dowries. So this, ‘hark what they do on the other side of the world because of long-held cultural practices that have nothing whatsoever to do with this question’ argument is disingenuous at best. Before abortion became medically more practicable, female infanticide was a common practice in many parts of the world.

The X case fares no better on cursory reflection.
The fact that the victim in that case had a miscarriage (possibly brought on by the trauma she was forced to live through) before judgment is irrelevant, because the point is not whether the government has to legislate for the X case – since it waited 30 years to do so, the answer to that question is de facto pretty obvious – it is whether it should legislate for it. Governments are under no obligation to wait until something goes horribly wrong to adopt appropriate legislation. Some things are entirely foreseeable – like that someone could become pregnant after being raped and not want to deliver the child of their rapist. We do not, as a country, need to wait and see if they all manage to give themselves miscarriages instead and thus solve the problem that way. There is, in short, no obligation to do things, as my mother would say, ‘bass-ackwards’. Apparently, for Renua, that kind of thinking – deal with problems before they happen – is akin to rocket science.

It’s this reliance on obviously faulty reasoning that makes me suspicious of Renua’s intentions to run policy on anything more complex than their gut feeling. And this seems to be borne out by the fact that the new party has delivered slim pickings when it comes to coughing up policy. Despite the fact that they claim to be different in every way, their consistent focus on who they are, not what they stand for, belies that for me. I realize that Renua’s members are bodily different people than say the members of Fianna Fail or Fine Gael, but that seems to be the kind of difference they are obsessed about – being different people, not doingdifferent things. It comes across as juvenile and petty, and I’m hardly the first person to have noticed this.

That being said, I looked through Renua’s policy document in search of points of interest, and found a few points that do bear some discussion.

‘Governing in the Sunshine’

Not real sunshine, obviously, because on this cloudy isle, no party can promise you that. Instead, Renua proposes to make the minutes of cabinet meetings public 48 hours after they have taken place, unless the meeting relates to a matter of national security. Renua also seems inordinately proud of its ‘e-citizenship’ policy, which will allow you to fill out forms online instead of with pen and ink. Admittedly, that is an improvement, but it’s hardly the game-changing, empowering exercise that Renua is making it out to be. The reins will firmly be in their control, but now you’ll know about it a bit earlier, possibly via a computer screen.

I have to admit, that this is a long overdue reform and probably the single best thing Renua has come up with. One of the biggest reasons that politics in Ireland is so murky is because no one’s job is actually defined. On top of that, it is very difficult for one person to span the work of a local councillor and TD at one and the same time. No level of road-fixing skills is ever going to prepare you to negotiate effectively with the IMF – we’ve seen the consequences of that.

This means a tax reduction for those rich enough to be buying and selling capital. In a time where economic inequality has increased between citizens, it’s not a good idea. Since Renua hasn’t said it would repeal water charges – a ‘tax’ that disproportionately affects the poor, it’s interesting that they are apparently eager to lower taxes that only afflict the rich.

It might seem odd that someone who favours direct democracy would oppose term limits, but they are a politically disastrous idea. If you stay with elected politics, term limits tend to lead to political instability because they often run due at inconvenient times. There’s really no point in forcing the people of a country to change political leadership if they don’t want to. This policy harks back to Renua’s main gripe that there should be a change in the concrete individuals who hold office but without telling us why that is. Political systems that have term limits are just as corrupt as everywhere else, so it isn’t that.

To be fair to Renua, the party declares that issues like abortion are “issues of conscience” and TDs should not be obliged to vote the party line on these issues. But whether or not abortion is legal is not any more a matter of conscience than the distribution of wealth is or whether or not children should have equal educational opportunities. Everything is an issue of conscience when you come down to it, just as all legislation really is a public not a private matter.

We’ve all met our share of civil servants who don’t actually work and top civil servants and administrators are obscenely overpaid in Ireland. We do need to get clarity on and deal with these things. On the other hand, I suspect this is code for introducing an American-style approach to ‘civil-service’ where public jobs become awful, ill-paid roads-to-nowhere that no one wants to embark upon. Will this end cronyism or will it just end unions? In my opinion, Renua’s repeated emphasis on the need for government departments to compete with one another for funding speaks to the latter. I’ve had a front-row seat at the compete-for-funding table in many organizations – all it achieves is diverting an enormous level of resources to that competition and truly vicious in-fighting. We shall see how this develops.

For me, this was the most interesting proposal of the lot. Tinkering with the electoral system is a major change, although only because by doing so you can virtually pre-determine who will win an election. It makes a big change for those contesting election, but not necessarily for the individual voter.
The first-past-the-post system used in Canada, the USA and UK, essentially forces the formation of de facto two-party systems, because it is almost impossible for small parties to gather enough votes behind a candidate to topple both of the main party candidates (who have often been helped by decades of gerrymandering). The single transferable vote is a godsend to independents as the least party-centric system, although it is probably the electoral system in which, in its labyrinthine complexity, it is hardest to say whether people actually end up with the government they voted for.
Proportional systems, used in most of Continental Europe, are sometimes more open to smaller parties than first-past-the-post (which is possibly why Renua is interested in them). However, they are also synonymous with wiping out independents, and moving politics away from individual candidates and into the hands of parties. I personally cannot see how Renua could reconcile proportional voting in single-seat constituencies with the retention of independent TDs. In proportional systems, votes are tabulated across constituencies and seats are allocated to parties on a national or provincial basis. If you do not tabulate votes across constituencies, you have a first-past-the post system, if you do tabulate votes across constituencies, you make it impossible for independents to win a seat.

Renua does propose a few changes that are long overdue, however, they tend to be of the tweaking, adjusting variety, and hardly the ‘radical reform’ that the policy document’s impassioned but fluffy language would have one believe. In my view, the party is more akin to a group of over-excited auditors than swashbuckling revolutionaries. If there’s one thing I’ve learned about being radical it’s that when you are really different, you don’t need to shout about it.

Some Thoughts on Renua