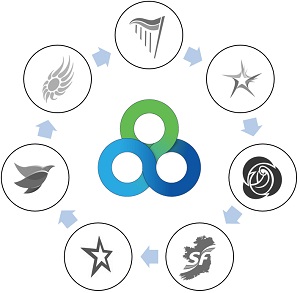 This is the second part of my series on Irish political parties and how my views coincide with or differ from theirs.

If you’ve read my webpage, you might be thinking: So, Roz, you want direct democracy and Direct Democracy Ireland (strangely enough) also wants direct democracy, so what’s the difference? Why should I vote for you instead of them?

The truth is that while DDI and I both welcome more citizen participation, we propose to bring it about in two very different ways.

That might sound inane, but as we all know, the devil is the details, and these details are extremely important for how you, the voter, would be living in the future.

First of all, some of the more prominent DDI members have been linked to what I would describe as right-wing, nationalist policies that seek to return Ireland to some blessed but fictional state of the past. Not only would I feel deeply uncomfortable entrusting a transition of the national political system to a group of people who are so fond of conspiracy theories as to at times seem only one step away from a tin foil hat, you just can’t solve the problems of the future purely by looking at the methods of the past.

DDI proposes to reinstate century-old articles of the Constitution that would more or less allow for a Swiss model of government, where citizens could initiate referenda, as long as a certain number of signatures (75,000) are collected in favour.

There are a lot of problems with this approach.

First of all, DDI aims to implement this measure on a national scale. In other words, until DDI has enough members in the Dáil to make it happen, this key part of their platform isn’t going anywhere. In the meantime, one can only guess that any elected members would spend their time pursuing the aforementioned ill-considered ‘tin-foil hat’ policies.

But even if DDI did get enough members elected to implement their version of direct democracy, it’s doomed to failure. It’s a bitter pill to swallow, but the truth is that referenda outcomes are every bit as influenced by money as traditional electoral politics are. Even requiring a certain number of signatures to be collected automatically favours those who have the money to organize such a collection. Studies show that this is true everywhere, from Ireland to the US to the Swiss model that DDI so loves.

To give one example, DDI at one point praised a recent Swiss referendum where citizens rejected a plan to buy a new fleet of fighter jets built by Swedish manufacturer SAAB.

However, DDI apparently didn’t do their research on this. It’s well known that SAAB tried to buy that referendum by donating 200 000 Swiss francs to local pro-deal activists and coordinated with the Swiss Minister of Defence and Swedish embassy in Bern to run a PR campaign promoting Sweden directly and the jets indirectly.

If someone had not leaked this to the press, the referendum outcome probably would have been much different.

And there isn’t always a handy whistle blower around. The only difference between the fighter jet referendum and others is that this time they got caught.

Motions to raise the minimum wage and reduce income inequality in Switzerland, a country where top bank executives earn hundreds of times the annual salary of their employees, have been defeated following massive, misleading PR campaigns in which employers’ spent millions cowing the electorate into preserving the status quo.

It’s the same in Ireland and the US, where the side that spends the most tends to win any referendum. There are occasional exceptions, but they are few and far between. As a general rule, money rules the day.

That’s because we are ALL a little prone to worry or doubt what we know is right when we are subjected to huge amounts of privately-sponsored misinformation. That’s nothing to be ashamed of – it’s just human nature, and we need to create a political system that works for us, instead of demanding that we somehow develop the ability not to be (even temporarily) influenced by privately sponsored ads and propaganda that are specifically designed to push every button in our heads.

A century ago, there weren’t radios and TVs in every home, and companies and governments hadn’t gotten PR down to a science yet. Media ownership had not become heavily consolidated. But this is the reality we are living now and it’s a reality that means that information is power and that you can spend your way to a win by manipulating that information.

That’s why the direct democracy that I envision for Ireland is more of a digital democracy. It will allow citizens to communicate directly with each other and vote online. Open discussion is just as important as voting. This will mitigate the influence of mass media information and paid advertisement at the information stage, thereby reducing the importance of spending and finance in our decision-making.

Past experience in numerous countries has shown that when communities make decisions directly with each other (for example participatory budgeting which was pioneered in Brazil or our own Constitutional Convention) they make better, more sustainable decisions that they are more satisfied with later. We just don’t get as side-tracked or prone to self-doubt when we cut out the middleman.

And it’s perfectly possible to facilitate online discussion and voting with existing software.

If that sounds like science-fiction, just remember that 20 years ago you were watching movies on video cassettes and taking photos with film. The world’s changed a lot. Politics needs to change, too.

And we can do that starting on a constituency basis. That means there is no need to wait for some party to win a majority to implement a nationwide system. We can start in Fingal right now. You tell me what you want, and I’ll vote that way. End of story.

Will that change Ireland from top to bottom tomorrow?

I don’t know about that, but I think it will change the world from top to bottom within a few years.

If 70% of people in Fingal voted against water charges (and the feeling I’m getting going door-to-door is that it’s more like 95%), how could our government hide from the fact that their decision has no democratic legitimacy? Not to mention, what would it do for our own collective action to know that our friends and neighbours agree on this point? I think we’d all feel less isolated and more empowered to act.

And that’s bound to be contagious.

When people in other constituencies see that we can express ourselves freely and vote our mind in the Dáil, I think they’ll be annoyed that we’re having all the fun up here and demand the same for themselves.

So, there you have it: DDI wants to go back to the past, using an ill-reasoned system that research show does not give power to the people, and I want to go forward, using a system that will increase people power and which we can start living right now.