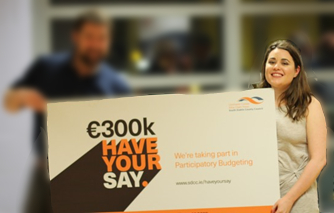 Something I have lobbied for in the past at the Fingal PPN and that I think is very important for our future is participatory budgeting.

Now, you may be thinking, what is participatory budgeting and why do I need it?

Participatory budgeting was first developed about thirty years ago in Brazil and it basically just amounts to allowing people in a certain area to decide how to spend some portion of the government budget. For example, a city or county might allocate 500,000 EUR or a million EUR to recreation or city improvements or similar and rather than deciding what to invest in behind closed doors, they invite suggestions from residents and then let everyone in the community vote on those suggestions (this is, of course, usually subject to legal restrictions – free cocaine parties or building a helicopter landing pad on the local elementary school tend to be off-limits).

However, as they discovered in Brazil, there’s a lot you can still do with participatory budgeting. In fact, they found that there are a lot of great results:

1)   first off, a lot of things that needed to get done, finally got done, including better sanitation, education, roads, etc.

2)   making decisions like this in a transparent way cuts down on clientelism, which means less waste. Right now, politicians often approve projects that they believe will bring them votes from small special interest groups or that provide wasteful contracts to third parties (Children’s Hospital, anyone?), because no one is keeping an eye on the bottom line. This is a lot harder to do when people are making budgetary decisions, because those decisions get scrutinized by a great many eyeballs. There’s nowhere to hide.

3)   lots of people who were often previously marginalized from politics were able to take part, especially young people, women and people from lower socio-economic backgrounds.

In addition, there is the advantage of just getting what you want more often in a transparent manner. All too often, many plans are not circulated until the last minute and it can be hard to get a handle on exactly what is going on. The amount of time I spend answering questions about ongoing public projects (and the time I have to spend getting to the bottom of those questions myself) under the current system is truly staggering. It often seems like no one really knows what is going on, or at least that information is not being circulated in a really clear way. Participatory budgeting keeps those things out in the open more and there is a clear portal where people can get up-to-date information.

So, is participatory budgeting a fringe idea?

No! They’ve been using it in Iceland for nearly a decade, as well as in Paris, New York, Portugal (nationwide), cities all over Germany and the UK and…thanks to fellow Independent Guss O’Connell…in South Dublin!

Whatever way you slice it, it’s a great idea and it’s something I’m committed to bringing to Fingal.

Participatory Budgeting – What Is It and Why We Need It?