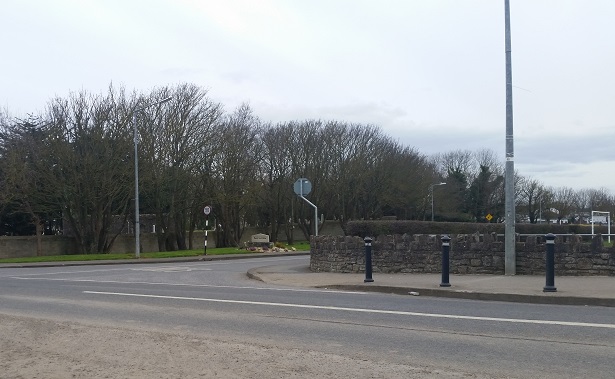 St. Catherine’s is one of my favourite estates to canvass, because I feel like people there are really involved in their area and they always take the time to share a lot of information about what is going on. That is really invaluable, because you can’t be everywhere at once and being able to act for people requires them to tell you what they want to have done.

So, a big thanks to everyone who takes the time to talk to me! I take careful notes of everything you say so that I can implement it at the first possible opportunity.

One of the major things that came up on my last canvass at St. Catherine’s was road safety. For one thing, there is a set of bollards along the footpath at the entrance to the estate. Many times I have driven by St. Catherine’s and asked myself ‘why do people always pull out so far there?’

It really is a safety issue, as the main road itself is quite narrow.

Now, I know why they do this. Mystery solved.

People in their cars cannot see past the bollards and therefore they are forced to inch their cars out onto the main road before turning. This is an accident waiting to happen. While I am sure that the bollards were put in for good reason, their height in relation to someone sitting in a car should have been considered in advance.

Another issue of concern is the park around the old Kenure House which is close by. Here, bollards have also been put up to prevent motorbike access to the footpaths. That is all well and good, but unfortunately, it means that mobility scooters cannot get down the paths anymore, either. Again, something that was meant to solve one problem has led to another, because the full impact of the measures was not considered in advance and the community as a whole was not consulted. This is something that has to change.

In addition, to this, it has come to my attention that speeding has become a problem in several estates around Rush, including both St. Catherine’s and Tayleur’s Point. In particular, delivery vehicles often speed through straight stretches in various estates. This is a huge danger, as small children are often playing in the area, and in the absence of a strong garda presence that might otherwise deter such behaviour, ramps are required.

While it may sound strange at first, I believe that some of this speeding is not entirely unrelated to the delivery model many large companies pursue, which demands drivers to perform to unrealistic schedules. This doesn’t exonerate those drivers from their own culpability, but it does show that a relentless push for efficiency and poor working conditions and protections can encourage people to be careless on the job and to take risks that they otherwise would not – possibly with tragic consequences – in some estates children have already been struck by cars, thankfully non-fatally.

Sometimes there is a tendency to see worker protection as something unto itself, but it is something that can have an impact on others in tangential ways that are not directly related. If you pressure people to behave irresponsibly, you will get more people doing so than you otherwise would have, and decrease your ability to avoid at least some accidents.

Ultimately, however, guards need to give people tickets for reckless speeding, and that requires guards to be around.